Is the Meidum Pyramid, the collapsed tower of Babel?


This is a rather different article, sourcing information found in Appendix D of my book, In Search of the Origin of Pyramids and the Lost Gods of Giza, available cheaply in Kindle edition. It is also available in paperback edition

Firstly, in Genesis... we appear to see a description of the world-wide pyramid religion

Providing the general outline here, I will add comments to the Bible. I feel that the Babel story as found in Genesis is merely a way of explaining, in ancient times, the prevalence of the pyramid religion around the world. It is perhaps a relic of the trading empires of the Bronze Age, a story which later found its way into the Bible. It seems to be rather different indeed from the collapse story!


1.Now the whole world had one language and a common speech. As people moved eastward, they found a plain in and settled there.

This is possibly a way of explaining to people, in ancient times, why it is that pyramids are found everywhere. Eastward movement, a religion arising out of drowned Doggerland?


2.They said to each other, “Come, let’s make bricks and bake them thoroughly.” They used brick instead of stone, and tar for mortar.

3 And they said, “Come, let us build ourselves a city, and a tower whose top is in the heavens; let us make a name for ourselves, lest we be scattered abroad over the face of the whole earth.”

This seems to be suggesting that if the people, perhaps semi-nomadic, won't build a tower, they might become scattered.


4 But the Lord came down to see the city and the tower which the sons of men had built.

The idea of the Lord 'coming down' seems to imply some form of solar worship, the sun striking a certain rock around equinoxes, solstices, etc. In fact, Robert Temple has recently found the Giza complex to be highly archaeo-astronomical.


5 And the Lord said, “Indeed the people are one and they all have one language, and this is what they begin to do; now nothing that they propose to do will be withheld from them.

6 Come, let Us go down and there confuse their language, that they may not understand one another’s speech.”

7 So the Lord scattered them abroad from there over the face of all the earth, and they ceased building the city.

This seems to be a retelling of section 1.), a kind of circularity of logic. The people were initially prevalent everywhere, yet were scattered because of their arrogance, but this time their languages became unclear to one another. Perhaps the unknown trading empire had collapsed.

Nothing is mentioned of any collapse here. Merely that people began to build a tower in one place, and then this people were scattered across the earth.

Information  about the supposed collapse of the tower of Babel may have pertained to the collapse of some other structure, subsequently associated with the tower of Babel. The text of Jubilees, like every Biblical work, is very fascinating. It reads like a historical chronicle! Considered canonical to the Ethiopian church it is not canonical to other churches. It is also known as the Lesser Genesis.

Ararat being Urartu, a land of the north. Shinar being Sumer. This implies the pyramid religion was thought to have come down out of the north. Urartu also has mountains. Did they miss mountains enough to build an artificial one?
2.4 km tall according to the google version of what a cubit was. The real answer may elude us. This also seems to preserve the memory of something having taken 43 years to build. I suppose we shall never know what that was.
Jubilees 10:18-28

Ham, or the Hamites, then supposedly took Africa, The Egyptian speech being Hamitic. Ignoring the geography for one moment, since legends tend to be all over the place, sourcing their ideas from everywhere, down the generations, we may look to a rather famous pyramid collapse, so famous that it altered the slope of the subsequent 'bent' pyramid from pi/4 to pi/3. 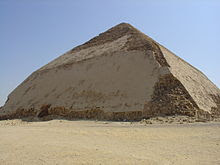 The Bent Pyramid, supposedly built after the Meidum pyramid


In the early 20th century, Egyptologists said the Bent Pyramid was altered in slope during its building work due to the fact that the perhaps wanted to save on building materials. Mendelssohn pointed out, as did perhaps several before him, that the collapse of the Meidum pyramid may have spurned the change in angle of the Meidum pyramid.


The tower of Babel legend is segmented into various areas. In terms of notions found in the earlier book of Genesis, people literally, supposedly had to build a tower, to avoid being scattered. It is almost as if this was part of their religion and more than one tower of babel was built. Pyramid building essentially seems to have been a sort of fertility religion. Build pyramids, as a kind of artificial mountain, crops grow in its shadow. If not, the tribe must move on to more fertile regions.

This is the remnant of the Meidum Pyramid. It is a sort of inner core. The supposed collapsed casing and other parts of the pyramid are found around it (according to another theory, the 'collapsed' part is actually the ramp of an unfinished pyramid!)


Legends come in all forms. Genesis supposedly retains material, ideas brought from Sumer, yet much later prophet Moses lived in Egypt. It was his home. Egypt cannot be divorced from the Biblical story. Is this then the pyramid or tower associated with the book of Jubilees? The collapse may have had a momentous impact upon Egyptian culture as well as pyramid design. Yet.... didn't find its way into the Bible! Or did it?

Charles Kos, In Search of the Origin of Pyramids, Plus Ultra Books, 2015
Kurt Mendelssohn, Riddle of the Pyramids, Norton, 1986.


If you would like to read more about some of my ideas regarding all this, please have a look at my book, In Search of the Origin of Pyramids and the Lost Gods of Giza, available cheaply in Kindle edition. It is also available in paperback edition for those who wish to make notes. I guarantee you will see info found no-where else.