It occurred to me to write a simple article on this theory to explain, simply what it is all about, and why it is far superior to the current tomb theory of the pyramids.

I came up with this theory to explain, simply, the triplicity seen at Giza. Three large pyramids, and then three smaller pyramids under two of the large pyramids. These are supposedly Queens' pyramids. I reconciled this with the NORSE mythology which states that the Triple Goddess, or Great Lady lives under world mountain which is what I presume the pyramids to be representations of. This would be representative of a once wider religious idea. In fact the Triple Goddess is almost the universal world-wide stone-age goddess.

Refusing to believe these were tombs (the burial practice differs to the MASTABA cemetery underneath the pyramids, these must be the actual royal burials), it appears they were built for a similar religious practice to the mounds of Europe and America and Asia. They had to be as big as possible in order to make an artificial mountain, and home of a pantheon of gods, essentially a huge 'tomb' but so big that it's for gods not man.

I was taught in archaeology class that when the Egyptian king died, he moved from a Horus, or sky god, into an Osiris, or Green Man fertility God. In fact we already have a 'green man' at the KHUFU pyramid who was worshipped before Osiris came into wider fashion: KHNUM. The name KHNUM KHUFU is scrawled inside the pyramid itself. KHNUM is essentially the creator of man, having sculpted him from clay. This essentially suggests Khufu became a 'Khnum' upon death, instead of an Osiris.

Giza Trinity theory is actually similar to current theory: except that it might reserve the burial chamber for KHUNM HIMSELF, explaining why no-one was ever buried inside a pyramid! The three Queens' pyramids next to the Khufu pyramid would have been reserved for the Triple Goddess who lived under world mountain. She survives in more recent tradition as a "Three Marys", who look over baby Jesus in the manger. This whole scene could well be primordial, dating from before Egyptian times.


The Trinity survives in various ways in the Christian religion. It is also clearly seen at Giza. As well as being seen at the Birth of Jesus, they are also seen in paintings RE the Death of Jesus. 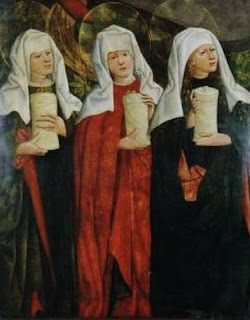 This was the stone-age pantheon which later found its way into the Catholic religion.

In fact a fertility goddess, ISIS was worshipped at GIZA well into Roman times. As late as the 19th century, fragments were broken off the Dream Stela, discovered under the sphinx, by local peasants, in order to increase, by ritual, their own fertility.

It took a long time to finish each pyramid. In fact, each would be about the lifetime's work for each of the king's involved, leading to the belief in later times they were trying to build tombs for themselves. What they may actually have been trying to build were temples for the Triple Goddess.

Although my book: In Search of the Origin of Pyramids and the Lost Gods of Giza, does not mention this in depth, this theory is a natural successor to that of the great book of the 90s: "The Orion Mystery". Orion was of course Osiris, and the three stars the belt, but also naturally in the 'reproductive' position, of the otherwise androgynous figure: the center of the Orion constellation. The triple pyramid therefore in a way copies this. What I say is that this is in relation to the Trinity.

In a nutshell the above is the theory. It took a great deal of time to build the Three Pyramids of Giza. Three kings seem to be been involved. These were built for fertility reasons. Not as tombs. The DISCOVERY: Giza is a Temple to the Stone Age Triple Goddess, NOT tombs for three kings.